Do you remember my earlier posts about Walmart Grocyer-To-Go? Well, can I just tell you that I am TRIPLY in love with the service now that we are knee deep in Holiday time. I used Walmart Grocery-To-Go to order all the food for my Thanksgiving dinner and it made it SO much easier. I sat at my computer in my sweatpants and clicked the items I needed. I choose a delivery date and time. 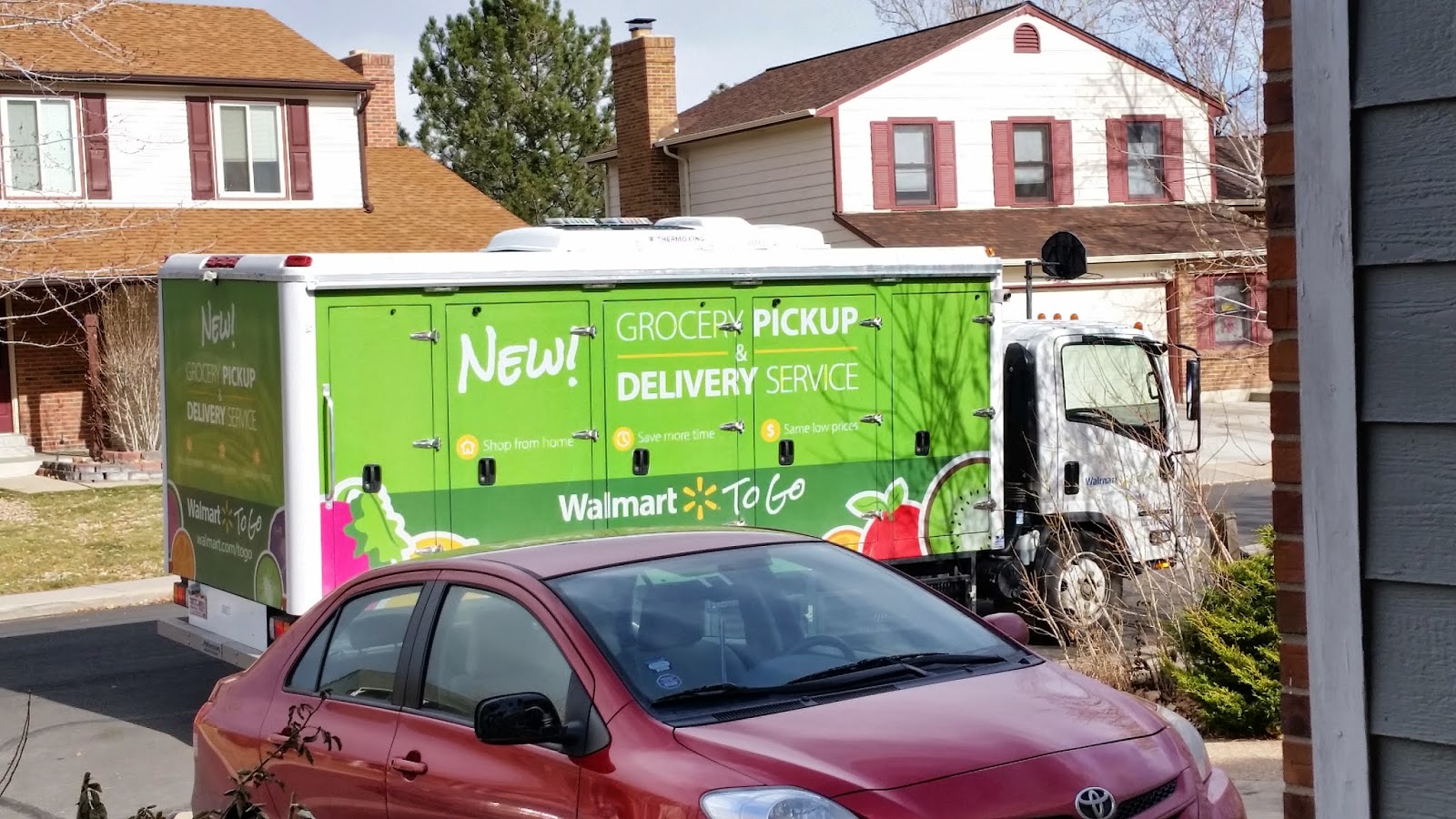 Right on time the Walmart Grocery-To-Go delivery truck pulled up to my house and dropped off everything I needed to make my family the perfect family Thanksgiving. I didn't have to rush to store, fight my way through the traffic jam of carts, stand in line to check out...heck, I didn't even have to get dressed out of my comfy clothes! 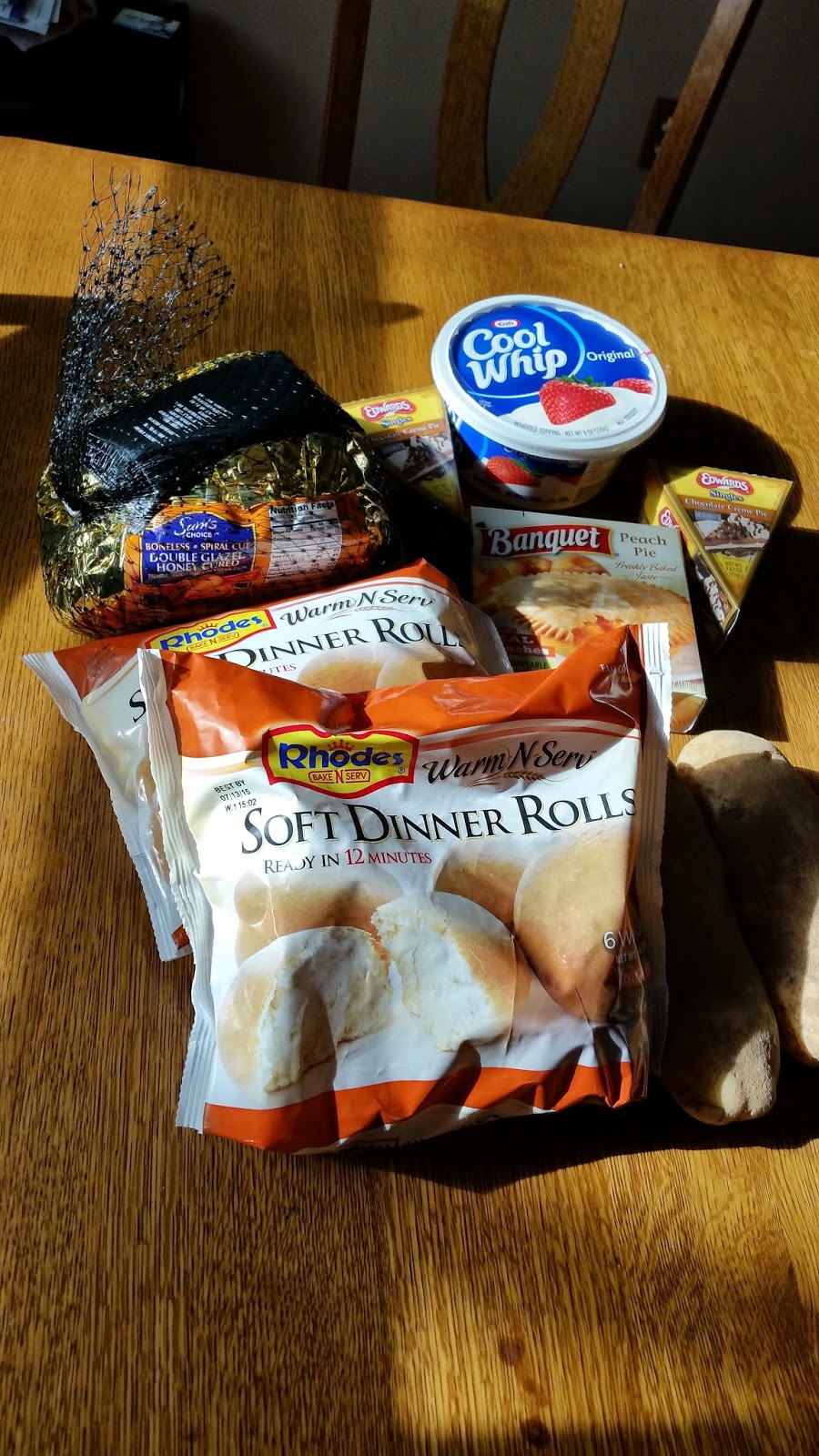 How can Walmart Grocery-To-Go help you this holiday season? Are you baking cookies or making candy for the holidays? Let Walmart-To-Go delivery all the supplies right to your door! Hosting a Holiday party? Have party trays delivered by Walmart-To-Go. Give Walmart-To-Go a try today and help take some of the stress out of your holiday!  Walmart Grocery To Go

As a participant in the Walmart Grocery to Go program, I’ve received a personal invite and payment for my time and efforts in creating this post.

Not Just Another September Morning

I woke up this morning thinking about this morning 13 years ago. I got Kaylee up for school and Alora ready for Chance to take to a friend's house. Her daughter was very close in age to Alora and she had a 2nd grader in Kaylee's class. We would trade off watching the babies and going into volunteer in the 2nd grade classroom. I drove Kaylee to school and stayed to help in her 2nd grade classroom. Chance called while I was busy helping with papers...he had locked his keys in his car and he needed me to bring him mine so he could go to work. I dropped off the keys and then headed back to school. I had the radio on and it wasn't the usual South Florida radio anchors...it was the Today Show...on my radio? They were talking about a plane hitting the World Trade Center in New York. At the time they thought it was a small, private plane. While they were on the air, a second plane hit another World Trade Center...another small plane?
I went back to the classroom and told Mr. Livingston that two planes had crashed into buildings in New York. We speculated whether there was an issue with Air Traffic Control. How could two airplanes crash into buildings in New York? I finished up my helper duties and went to my friends house to retrieve Alora. The Today Show was still on my radio, but they had more information...not small planes, commercial aircraft.
When I got to my friends house I told her what I had been hearing. We turned on the tv and couldn't believe our eyes. Our 16 month olds played with toys as we watched thick smoke pouring out of two buildings in New York. I watched in horror as the two impossibly tall buildings crumbling like a pile of sticks. All I could say was, "The firefighters would have parked their trucks right there! They would have been right next to those buildings!" My parents were firefighters...I knew firefighters didn't park blocks away and walk in..they park right next to the burning building.
Then another plane...this time the Pentagon. All morning I kept in touch with Chance by phone. A fourth plane was missing. It would finally be found...a smoking hole in the Pennsylvania countryside.
My friend and I debated all morning, should we go to school and pick up our girls? They only had a half-day. Should we wait until the normal half-day pick up time? We decided to wait. As parents stood by the fence waiting dismissal, a dad made a comment that took my breath away, "People don't realize it, yet, but we are at war."
In the following weeks and months, as we learned how close we had been to the terrorists of that day. Several of them lived in an apartment complex across the street from the Target I frequented with my mother-in-law. South Florida had already held the spotlight for most of the past year with our hanging chads. Now this.
As you go about your day today, remember back to that morning 13 years ago. Reflect on where you were, what you saw, what you felt. And then remember, today is not "just" another September morning. It is 9/11.
Posted by Marie at 6:46 AM No comments:

Walmart To Go...Saving Time and Money 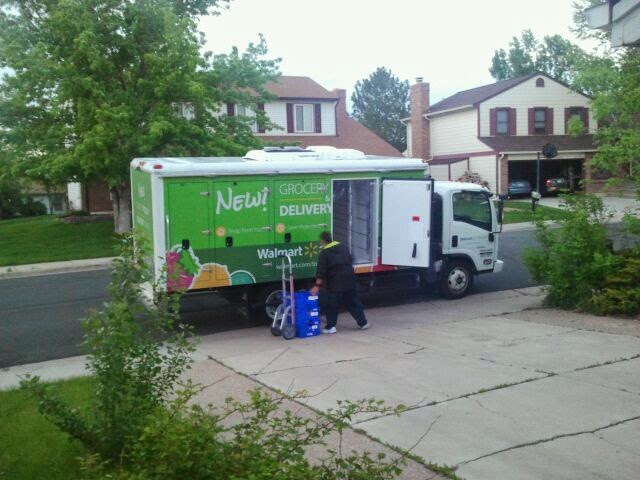 Did you know that there is a new grocery delivery service in town? Walmart To Go offers the variety of shopping at Walmart with the convenience of a delivery service. The week I first used the Walmart To Go service, my husband was out of town. Having 3 girls in various activities, working full-time and being the only parent for a week makes getting to the store is a difficult and tiring proposition. Walmart To Go made it SO much easier. I simply logged onto the Walmart To Go site and started shopping. One aspect of the Walmart To Go website that I love is that it provides the unit price on each item...I am a comparison shopper and am always looking for the best deal, so this was super helpful. One thing to be aware of when ordering from Walmart To Go is the substitution policy. If the item you have ordered is not available, they will substitute a similar item. The great part: if the item they select is higher priced than the original order, you still pay the lower price. The bummer: if you have your heart (or stomach) set on a specific type of Cheerios, you may be disappointed when they don't arrive at your doorstep. The solution is simple, you can either to select to never have substitutions made or you can make the decision on an item by item basis in your order.
Walmart To Go's website also makes it super easy to keep to your grocery budget. On the right-hand side of the screen is a running list of items purchased and the current total. I knew what I wanted to spend on my first Walmart To Go shopping trip and it was easy to add or remove items based on my budget.

And, it is not just groceries that can be delivered. Need some more allergy medicine? They deliver that. Need more laundry soap? Yep, that too! What a great time saver! No more wandering the aisles looking for what you need.

Delivery for Walmart To Go is an inexpensive $7 for a shorter delivery window or $5 for a larger one. If that still doesn't work for you, you can pick-up your items up at your selected Walmart for FREE! How fabulous is it to go shopping without placing a foot outside your car?!?

Do you want to try Walmart To Go? Use this link to see if it is available in your area.

As a participant in the Walmart to Go First program, I’ve received a personal invite and incentives for my time and efforts in creating this post.
< img src='http://soch.us/IEL7-22PJT.gif'>

We had a great time at this year's trek to Anderson Farms. The trails were a little "soft" but there were only a few mud puddles. There were quite a few mosquitos, so be sure to bring some mosquito repellent. There are some HUGE pumpkins in the field...so head on over and pick your favorite!

Don't miss this year's Fall Festival at Anderson Farm!
Anderson Farms Fall Festival, Sept 21 - Nov 2, open daily
Fall Festival September 21 - November 2: Come See Colorado's Longest-Running Corn Maze - Take a hayride out to the pumpkin patch on a wagon pulled by an antique Oliver tractor. We have pumpkins as far as the eye can see! Get Lost in our 30 acre corn maze! The maze is open day and night and is never haunted. Plus the whole family will enjoy Pumpkin Launching, Mine Cars, Barrel Train, Farm Animals, Kiddie Korral, Pedal Karts, Gem Mining, Private Campfires, Hay Bale Maze and the World's Largest Cornucopia. For the more adventurous crowd, check out Terror in the Corn and Zombie Paintball Hunt.
http://www.andersonfarms.com/ 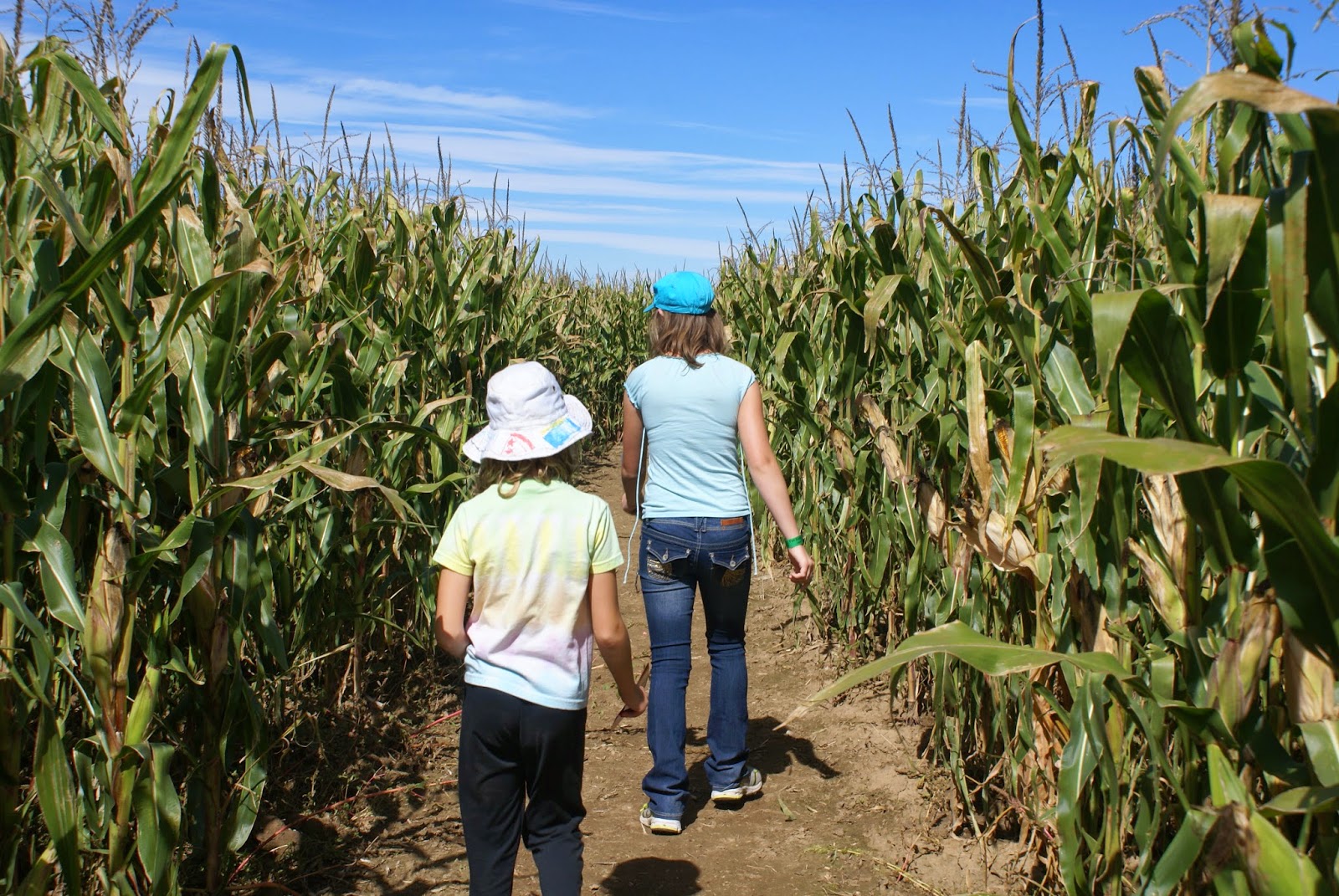 Solving the mystery in the corn field...who kidnapped the farmer? 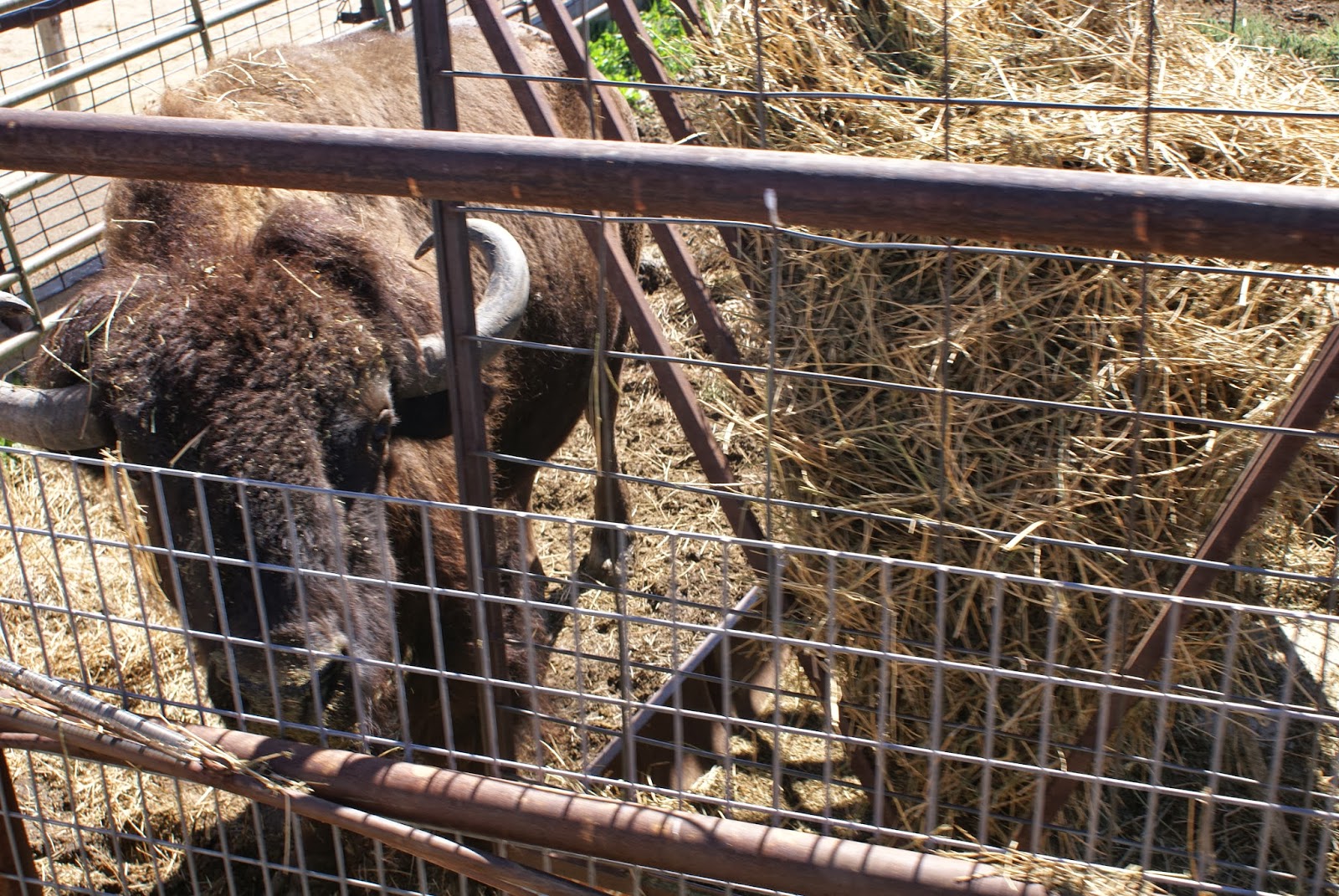 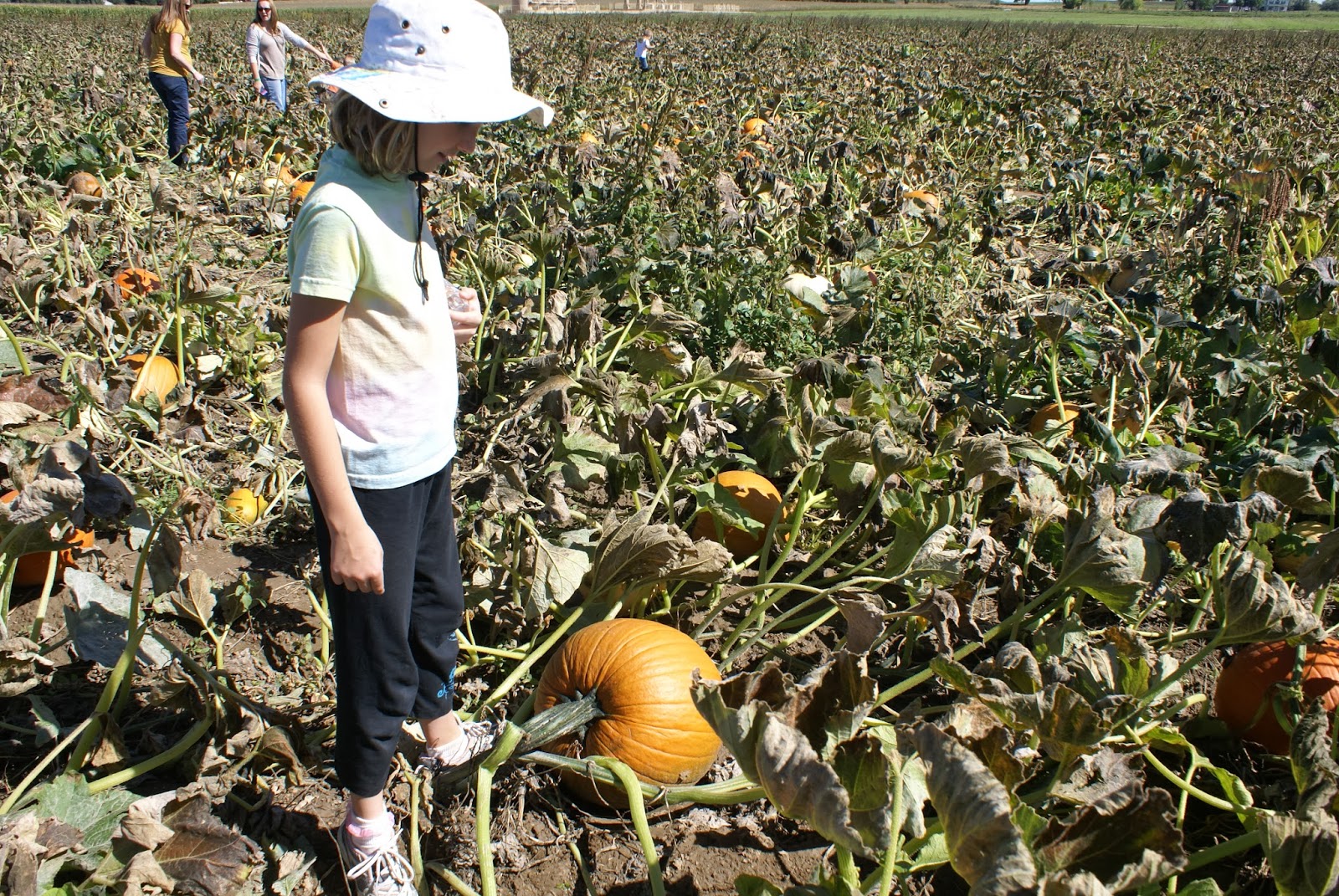 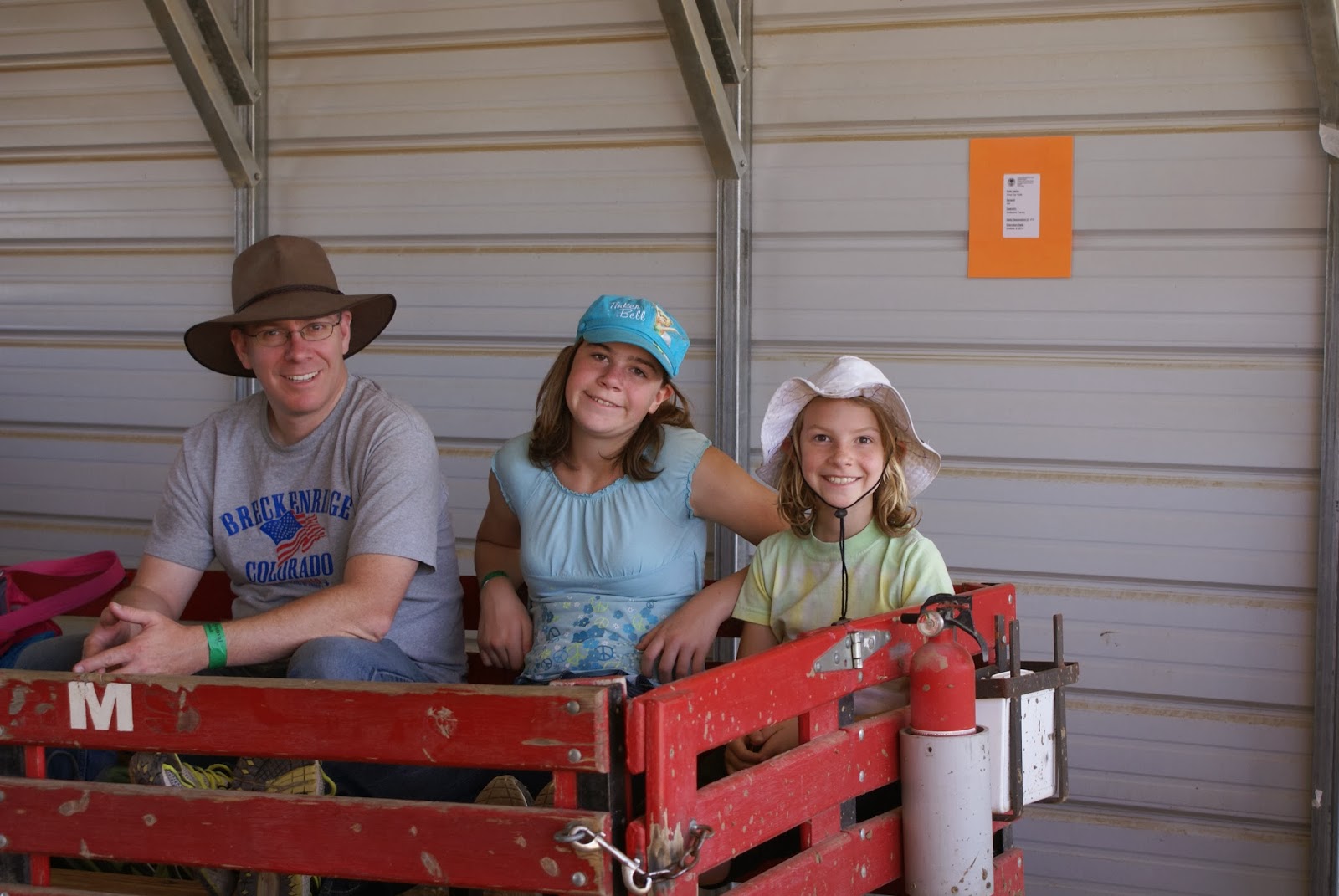 Riding on the mine cars. 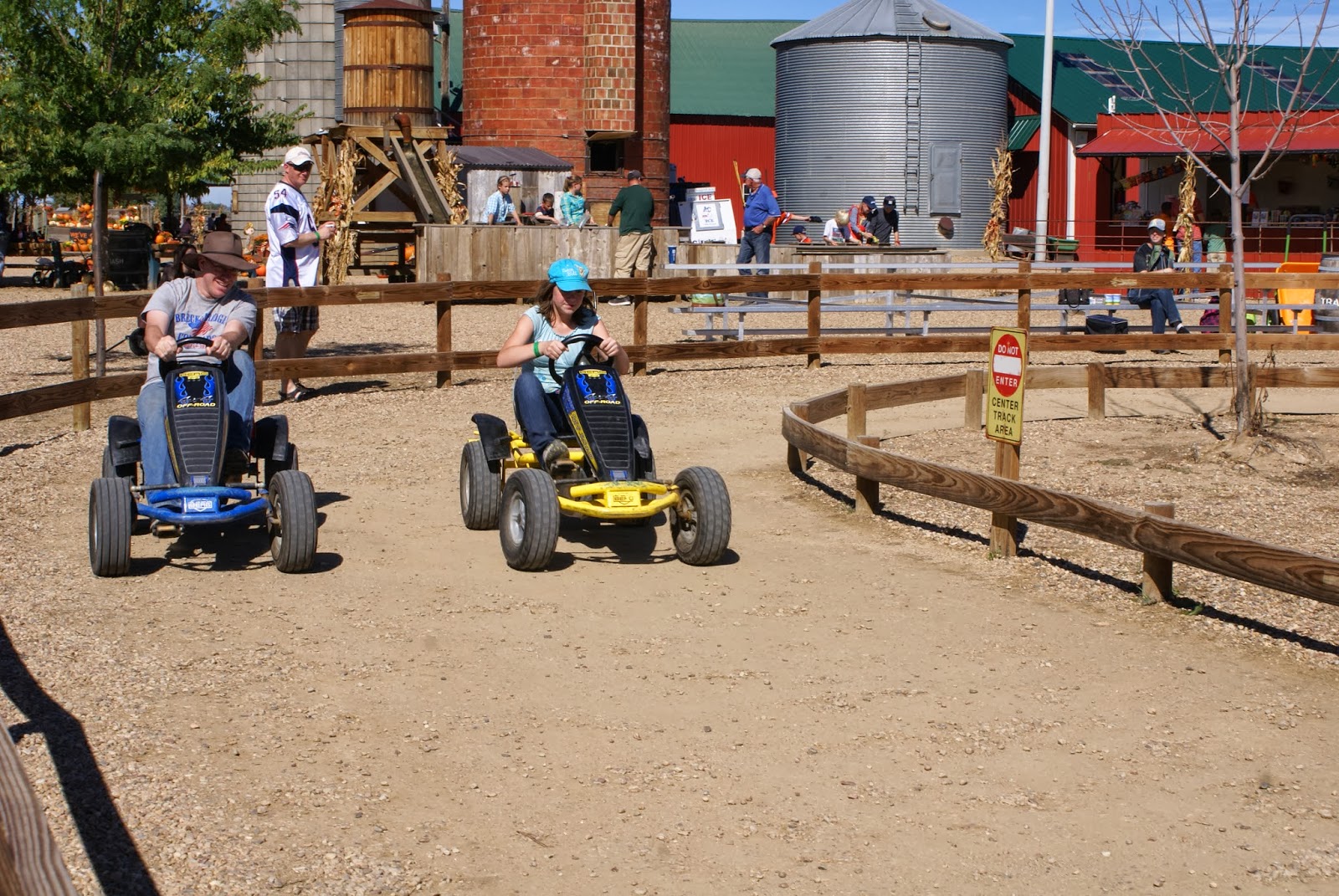 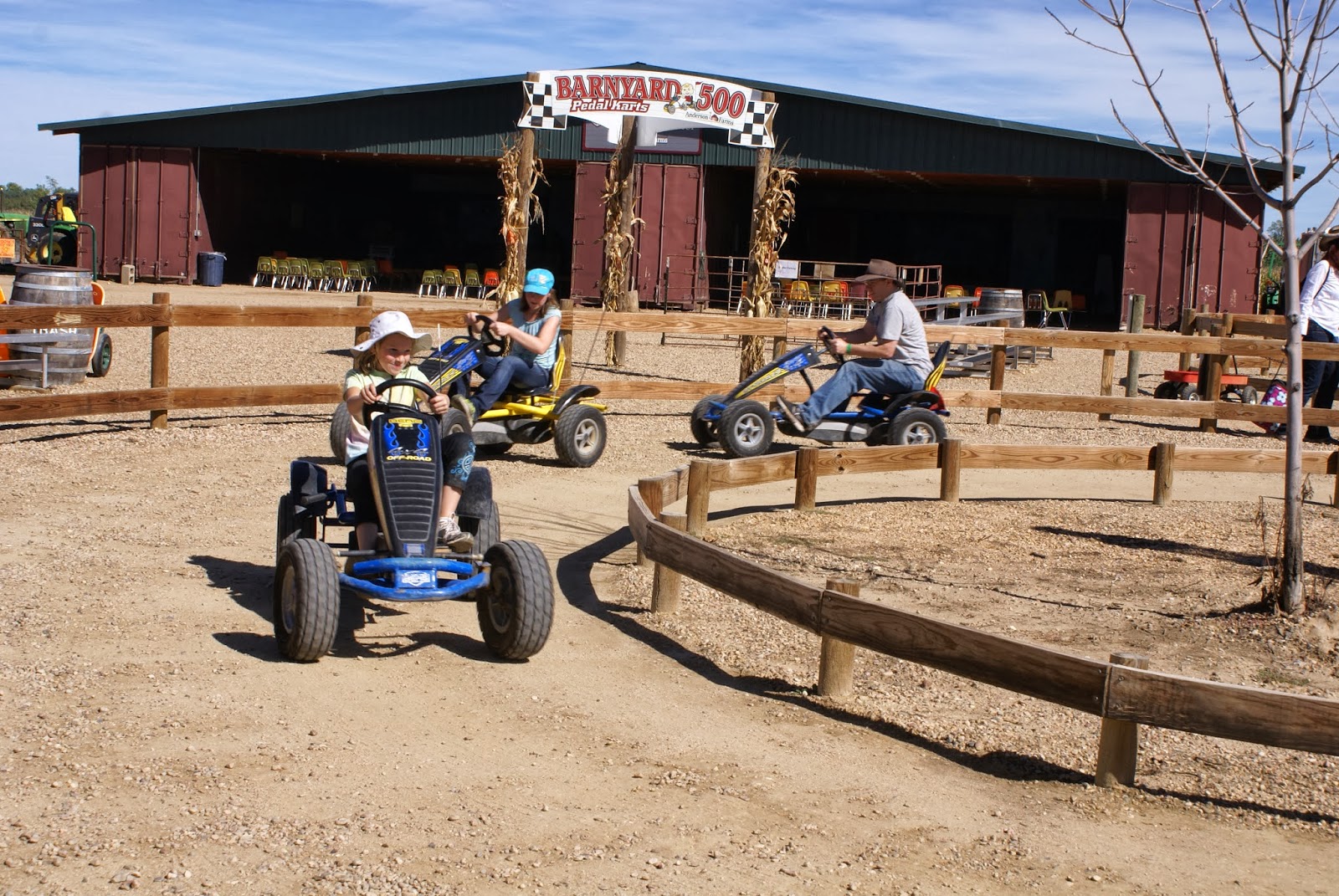 It is that time again...time for our annual trek to Anderson Farms! Last year the girls LOVED driving the pedal carts, being towed in the barrel train, finding our way in the corn maze, and watching pumpkins being launched across the pasture! Opening weekend for Anderson Farm's Fall Festival is THIS weekend and will continue until November 2nd. Don't wait, grab your family and head up to Anderson Farms!

Anderson Farms Fall Festival, Sept 21 - Nov 2, open daily
Fall Festival September 21 - November 2: Come See Colorado's Longest-Running Corn Maze - Take a hayride out to the pumpkin patch on a wagon pulled by an antique Oliver tractor. We have pumpkins as far as the eye can see! Get Lost in our 30 acre corn maze! The maze is open day and night and is never haunted. Plus the whole family will enjoy Pumpkin Launching, Mine Cars, Barrel Train, Farm Animals, Kiddie Korral, Pedal Karts, Gem Mining, Private Campfires, Hay Bale Maze and the World's Largest Cornucopia. For the more adventurous crowd, check out Terror in the Corn and Zombie Paintball Hunt.
http://www.andersonfarms.com/

Kids Vacationing on Their Own

The girls (all three) have been in Florida with family for a month. For Chance and I, this has been a wonderful respite from the everyday hustle and activity of kids. For them, I think it will be memories that last a lifetime. They are staying with my mil, but are also seeing aunts, uncles, cousins, and friends. We see the family occasionally, but usually on for a few days. This is the first time the kids have spent a longer period of time getting to know their family....and for the family to get to know the girls. The hardest part of them being gone for a month is Arionna's anxiety. She misses us. REALLY, REALLY, REALLY misses us...as she told me for 45 minutes on the phone the other night. I will admit, those conversations are draining...sucks the life right out of me. I remind myself...this is GOOD for her...to really know what it is like to not be with us everyday. And, it is GOOD for her to stretch outside of her comfort zone. Now, if I can just make it through the next few days until they come home..all will be good!

Have you ever sent you kids on an extended vacation without you? How did you/they handle it?
Posted by Marie at 7:00 PM No comments:

Experience the fun of an Urban Scavenger Hunt in downtown Denver.  This Smart Phone guided adventure lets you and your family experience the fun of the Amazing Race in 2-3 hours.  You solve clues and complete challenges while learning about the city in a fun new way.  This family friendly adventure is appropriate for ages 7-70 and is perfect to get the family out on a day of doing and learning. Start on your schedule and play at your own pace.  Register on-line atwww.UrbanAdventureQuest.com Save $10 With Promo Code: USFAMILY Cost: $39.20 for a team of 2-5 people after Promo Code: USFamily
When: Play anytime during daylight hours
Save $10 with Promo Code: USFAMILY:http://www.UrbanAdventureQuest.com Marie
I am a stay-at-home mom to three great girls aged 7, 10, 16. I have been married to my college sweetheart for 16 years.